“To see our hard work recognized with multiple awards is extremely gratifying. We are especially proud to state that the organic offerings of Fromagerie L’Ancêtre have impressed the panel of expert judges once again this year. Each time we enter this ever popular contest, we substantiate our reputation and enhance our medal count. Since 2013, total medals won have increased in number from two to nine. This timely feat provides an admirable boost to the launch of our 25th anniversary celebrations,” underscores Pascal Désilets, President.

Of particular note – a first for us! – is the medal received in the Best Non EU Cheese class for our old cheddar. Our extra mature cheddar also impressed, meriting a bronze medal. Then followed another first, a bronze medal for our salted butter in branded packaging.

Fromagerie L’Ancêtre also drew admiration for innovation. After having made our mark at home in Québec with a 2017 DUX Eat Better Live Better award in the new product category, our Le St-Grégoire Cheddar earned a silver medal at the Global Cheese Awards in the Cheese with Health Benefit – Hard class. Readers will be interested to learn that this is the first award outside the country for this innovative new cheese.

Launched in 2016, Le St-Grégoire is the only half salt cheese on the market to boast a lengthy shelf life when stored in the refrigerator unopened. Made with 100% pure, pasteurized organic cow’s milk, this cheese features only 85 mg of sodium per 30 g portion compared with regular cheddar which contains between 190 mg and 240 mg on average.

Interestingly, our mature cheddar took gold hands down against rivals from the UK and Ireland traditionally recognized as specialist producers of this kind of cheese.

Which award-winning cheese would tempt you? Discover all the products in our tasting catalog >> 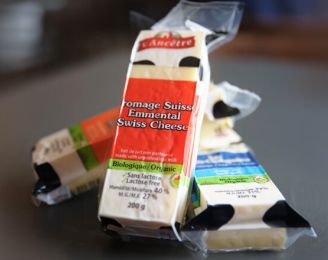 Read the article
Every biteis a better world